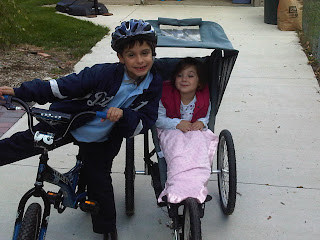 It was only 3 miles, but it seemed much longer. One of those runs and times where you wish you could just bottle it up and go back to over and over again. That is what memories are for. Even though, I know these times won't be like this for long, it is one that I will hold onto.
Posted by Unknown at 7:38 PM

We closed tat era earlier this year with the sale of the BOB stroller, still now I am looking forward to the new one with bikes and hikes!

Hey Dirt Dawg, I will be arriving in the big "D" on Thursday night for the marathon. Do you have anything planned for the weekend???? I am going to see the downtrodden Wolverines get annihilated by the Hawkeyes. I am thinking that I will go to the expo on Friday.

I started running with my son in a baby jogger when he was 8 weeks old and continued nearly daily until he was almost 4. I have wonderful memories of that, and he does too- though most of them are vague. It was a wonderful time, almost magical, and I too wish I could have bottled a bit of it up. He is 13 now and we're on to bigger, better adventures, but I'll always cherish that time.