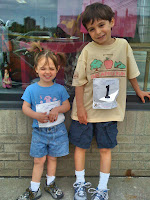 Armed with his new "fast shoes", Little Dirt Dawg was ready to run this year's edition of the Kids Fun Run with blazing speed. After watching his old father pace a friend to a 10 minute PR in the 10k, Little Dirt Dawg did a pre race warmup or the beginnings of a mini duathlon by riding the 1.25 miles uptown to the start of the race. Dirrty Feather, armed with her "hand me down" trail runners and catching a ride in the Doodlebug took a more leisurely warmup. 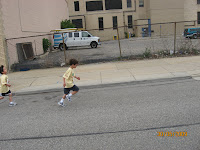 Fearful of clowns (Read Ronald McDonald) who was the official starter, Dirrty Feather would not leave my side and was pretty tearful and pissed until she could run far away from that dude. Little Dirt Dawg on the other hand was cruising and showed really good form. 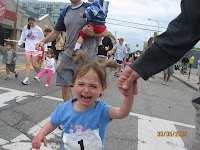 The dude with enormous nose, ME, was able to guide Dirrty Feather down the course and away from the clown as I told her of all the riches she would accumulate at the finish. 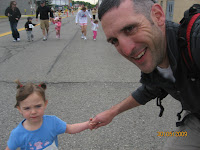 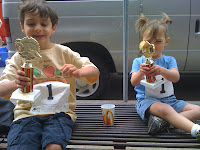 These are the days I will remember not only as a parent, but as a runner. Sharing my passion, my love of the sport on.
Posted by Unknown at 3:13 PM

Lord Luvva Duck!! Those are the cutest kids ever! (except for my grandchildren) My daughter used to be terrified of clowns - whoever thought up the idea should be shot. Just sayin'.

I am with Dirrty Feather on the clowns. Nothing makes me want to run faster than clowns.

I've never quite understood why some people are scared of clowns, but I'm glad Dirrty Feather was willing to leave him in her dust!

My mother collected clowns and I hated them - once I read Stephen King's book "It" they just plain terrified me. Dirrty Feather - you stay away from those scary clowns -I don't care if they are toting a burger or some chicken nuggets!

Clowns are just too creepy. Cute kids. Keep on running

That was one of my favorite podcasts so far. I gotta get my little guy to a race soon.