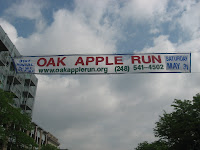 After an indoor season of training @ play cafe's, swimming, and once the weather broke hopping on his trusty 16" Trek, Little Dirt Dawg was more than fit and ready to tackle the 31st edition of the Oak Apple Run and the kids 1/4 mile dash. In fact this morning, after I got home from running the 10k, Little Dirt Dawg stated that he was going to run so fast that everyone was going to feel his air! 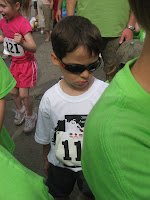 Outfitted in his fast shoes and glasses, Little Dirt Dawg takes a moment to center himself and get ready. 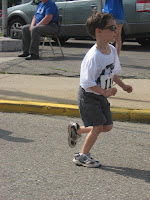 After a crowded start, Little Dirt Dawg managed to show good form as he headed into the homestretch. 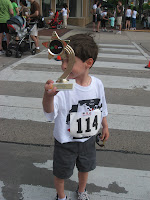 Upon receiving his trophy, Little Dirt Dawg stated, " I have never gotten a trophy before."

Why I have never run this race before is beyond me and seeing that the start line is a mere mile away and covers most of the area in which i due my runs I have no valid excuse. However, that being said and the fact that I am going to pace Dirrty Girl @ the Dexter 1/2 marathon tomorrow, I thought I would use it as an opportunity to check my fitness.

The temp @ the start was a mere 67 degrees, but 84% humidity. I thought that around 42 minutes would be a solid effort. Timing chips were provided, but oddly enough there was no timing chip mat at the start, so off I went with my Garmin to give me splits:

I felt really good, but did start to feel like i was fading the last mile or so due to the humidity. A friend of mine said speedwork makes a difference. I am inclined to agree.